Paris Phenix Quidditch is a muggle quidditch team (what is quidditch?). We practice every week and try to get ready to compete against the other French or international teams. 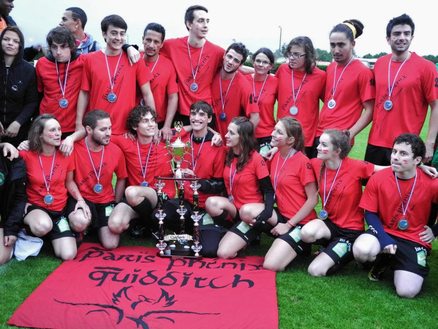 A spirit, a team, a victory!

Paris Phenix Quidditch is one of the two teams that resulted from the separation of the team of Fangs of Paris, which competed for France in 2012 at the first Quidditch Summer Games and ended up second!

Today, the Phenix teams has many players, some are official members for the competition, other just come for the practice. Our team is  a real family, our players are bound by blood, love or friendship. Paris Phenix Quidditch is a heart team, not a university team. For us seriousness and competition goes with cheerfulness. Without real motivation there is no success.

Paris Phenix is a IQA official team since September 2012, but they only became an official association in January 2013.

The committe is as such :

Meet the team with videos: